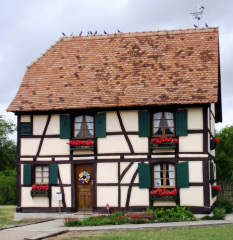 It’s a long way from Wahlbach, France, to the Little Alsace of Texas, but a small Alsatian house originally built between 1618 and 1648 was relocated to Castroville and has made history.

The four year relocation and restoration project was undertaken by the Association Jardin des Racines (Garden of Roots Association) and carried out by faculty and students of the Lycee Agricole (Agricultural College) from Rouffach in the Haut-Rhin department of Alsace, France. They have been assisted by volunteer craftsmen Francois and Jacqueline Deyber of Enshisheim, Edmund Messerlin of Mulhouse, and Rino Bortolini of Ensisheim.

The building was purchased by the Association Jardin des Racines, carefully disassembled, and shipped to Texas. They landed at Houston and came by truck to Castroville in January 1998. The plan to locate the house in the Garden of Roots was ruled out after the flood in 1997 covered the garden area, and the new site by the highway was selected. 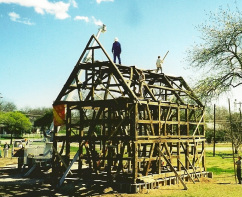 The house was formerly owned by the Steinbach family. It followed the medieval art of house building, including fachwerk. It is 2-1/2 stories high and has 1,232 square feet of living space. The half-story is a dachzimmer, or loft, an open attic where beds were placed.
The framework of the house was erected in 1998 and the following year brick and mortar added to enclose the fachwerk. 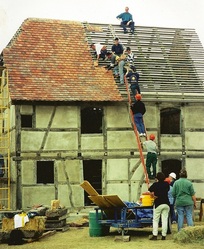 In 1999 the association arranged for the roofing tiles to be shipped to Texas. On February 7, 2000 the students and faculty of the Agricultural School with director Danielle Utard and the president of Association Jardin des Racines Andre Hartmann, arrived in Castroville to complete the roof and the landscaping at the garden. The exterior of the house was plastered by the volunteer craftsman in late 2000 and later painted in 2001.

Work on the interior of the house began at the close of 2001 and continued through 2002. The city of Castroville provided for Griggs Construction, Larry Tschirhart, Zinsmeyer Mechanical and Welding, Dean Jaks, Scott Hunsicker, Isidoro Martinez and Alfred Wood to transform the open interior into a functional living space by March 2002. 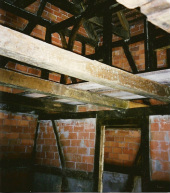 Work begins on the interior

The doors, windows and shutters, which were made in France and sent to Castroville in February 2002, were installed by 10 volunteer Alsatian craftsmen during the following month. Alsatian furniture and other items were donated by individuals from Alsace and placed inside the house, which opened to the public as a tourism and cultural center following the April 8, 2002 Grand Opening.

The Steinbach House is available for viewing on Monday – Friday 9 am–5 pm; Saturday 10 am–4 pm; and Sunday 11 am–3 pm.
The Steinbach Haus is a Tourism Center run by the Castroville Area Economic Development Council.
Phone: 830-538-9838
Website: www.steinbachhaus.org

For more information about the Association Jardin des Racines email them at: jardin-des-racines@voila.fr