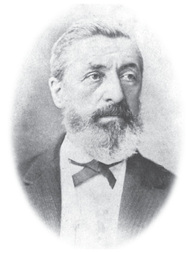 Ferdinand Louis Huth, Jr. was born January 3, 1813 in Neufreystadt, Baden, Germany. He persuaded his family to assist Castro with the immigration project to Texas. The Huths helped organize the emigrants’ transportation to Texas and furnished them with 12,000 francs worth of goods to sell in Texas in hopes of profiting from Texas exports. They sent Louis, Jr. to help Castro with the colonization.

When Huth arrived in Galveston on January 2, 1844, he found the first group of Castro’s immigrants waiting there, and no sign of the agents assigned to take care of them. Huth took responsibility for the immigrants and they continued on their way, arriving at Porta LaVaca on about January 11. From there they proceeded by oxcart to San Antonio, where they arrived by March. Castro joined the group in San Antonio in July, and up to this point no one in the party, including Castro, had seen the land they were planning to settle. On September 2 the group left to found Castroville.

During their first election on September 12, 1844, the people of Castroville elected Huth as Justice of the Peace. For two years Huth was director of the colony while Castro was back in Europe recruiting additional colonists. During this time, Huth arranged for people to get from Galveston or Porta LaVaca to Castroville and acted as director of the colony, organizing the planting of crops, lending money, and distributing supplies to new immigrants. In Europe, Louis’s family found people interested in emigrating and helped them get to Antwerp, where they boarded Castro’s ships to Texas. 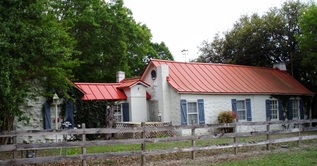 In 1846, Huth was dismissed from Castro’s employ, but Huth remained in Castroville, developed his retail business, and served in public offices in the county through the early 1860s. He was elected one of the first justice of the peace for the Castroville precinct of Bexar County. In 1848, when Medina County was created, he was the first tax assessor-collector and later served 10 years as county clerk. In 1860 he was elected chief justice of Medina County for one term. He ran a brewery and a gristmill, opened a store with partner George Louis Haass, and was a charter member of Zion Lutheran Church when it was founded in 1852. He married Rosalie Rhin, an emigrant from Altorf, Bas-Rhin Alsace, and they had two sons, Joseph Louis and Albert. The dreaded cholera epidemic claimed the life of Rosalie and Albert in 1849. In 1851 he remarried to Sophie Kuhnen and they had four children, Emelia, Lena, August and William.

In 1863 he moved his family and his business to San Antonio, where he founded Huth & Co., a hardware and seed company which was successfully operated by four generations of his family. Huth died at home on December 24, 1892, and was buried at the Alamo Masonic Cemetery.

A Medina County historical marker was dedicated in 1998 on Houston Square, honoring Ferdinand Louis Huth for his service to the City of Castroville and County of Medina.