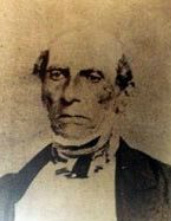 Empresario and Founder of Castroville

Henri Castro was born in 1786 in Bayonne, France, to a prominent Jewish family whose ancestry was Portuguese.  At just 19 years of age, Castro was appointed by the Governor of Landes to welcome Napoleon on a visit to the region and he later served in Napoleon’s Guard.  He was married to Amelia Mathias, a wealthy widow, in 1813.  His adventurous spirit took him to the New World in the late 1820s after the fall of Napoleon and he was appointed French consul at Providence, Rhode Island.  He quickly learned English and in 1827 he became an American citizen.

He was successful in obtaining a land grant in February 1842 from Texas president Sam Houston and the Texas government.  The grant promised him more than a million acres of land if he would introduce at least 600 families and/or single men within three years and establish four towns.  Each colonist would receive 640 acres (or 320 if single) if they built a cabin, cultivated at least fifteen acres, and resided on the property for three years.

Castro energetically recruited colonists from all over France, having the most success in the Rhenish provinces, especially Alsace.  His first group of emigrants left le Havre aboard the ship L’Ebro and arrived at Galveston January 1, 1843.  Six more ships were chartered during the next year.

When Castro returned to Texas in May, 1844 there were some 700 disgruntled and impatient colonists waiting to assume possession of their promised land.  Castro made a scouting trip in July west of San Antonio to get his first view of his grant.  The grant boundary was about five miles west of present-day Castroville. 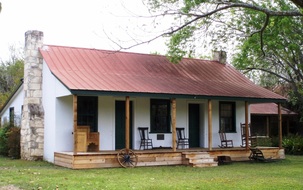 To entice and appease his colonists he offered them a free town lot and 40 out-acres, in addition to their original contract.

With final preparations completed, Castro made a final plea to the colonists to start out for the land grant, and on September 1, 1844 Castro left San Antonio with his party, including twenty-seven men bound for the Medina Valley.  They crossed the river and set up camp on September 3, 1844.  A communal shelter was built in a clearing to hold supplies and house the settlers until their homes could be built.  On September 12, the town site was named Castroville and public officials were elected. A mass was said by the first bishop of Texas, Jean-Marie Odin, to dedicate their new enterprise.

Castro built his own settlement in Castroville in 1845 which included a stone house, another dwelling along with two stables, an outside kitchen and other buildings. The property and homestead were deeded to Castro’s adopted son Lorenzo then later sold. The small stone house can still be seen today, located on Fiorella Street, and has been remodeled as The Castro Homestead Bed & Breakfast by owners George and Joan Voneiff.

Castro made large personal investments to keep the colony strong spending more than $200,000 for livestock and supplies. Castro also founded three other settlements: Quihi in March of 1846, Vandenburg that same year in September, and D’Hanis in the spring of 1847.  All told Castro was instrumental in introducing more than 2100 colonists to Texas, second only to Stephen F. Austin.

Castro was approaching 78 years of age when he decided to return to France through Mexico in 1864.  In Monterrey he became ill and died there November 3, 1865.  He was buried in Monterrey; today the grave is not to be found.