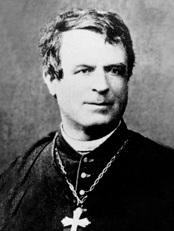 Claude Marie Dubuis was assigned to the parish in January of 1847 by the first Bishop of Texas, Jean Marie Odin. Dubuis, a native of Teche, France was born March 8, 1817. He was educated in two seminaries in France and ordained a priest January 1, 1844 in Lyons, France. He heard about Texas when Bishop Odin was in France recruiting missionaries to serve in Texas and he was persuaded to follow him. He came to New Orleans in 1846, then studied in Missouri before coming to Texas. Odin assigned him to Castroville to take care of the German and Alsatian speaking colonists there and in the surrounding area.

When he arrived in late January 1847 he found a very small church and a crude hut that had been used by a former priest, and some unresponsive colonists. He immediately set to work getting acquainted with the Alsatian language and started building a new house with the help of his assistant Father Matthew Chazelle. He opened a school teaching some eighty youngsters within the first year. His energy and disposition soon won him the affection of the people.

Dubuis developed the cemetery and placed a cross on the hill next to the cemetery, following a tradition common in the villages of France. Since then it has been called Cross Hill and was used by the Catholics for more than 100 years for pilgrimages and prayer petitions, such as rogation days, to pray for successful crops of the farmers. The custom was discontinued in the 1950s. 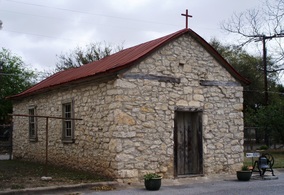 When typhus fever claimed the life of young Chazelle in 1847, Father Emmanuel Domenech was sent to help Father Dubuis. Besides Castroville, their pastoral duties included taking care of the Catholics in Quihi, D’Hanis, Fredericksburg, and New Braunfels. Father Domenech later published a journal of his adventures in Texas and Mexico, which gives us some valuable insights of the life of these early pioneers.

The church Father Dubuis found when he came to Castroville was too small and Dubuis was determined to build a larger one. In 1850, with the help of the men of the parish and Father Domenech, the second church was completed by Easter of 1850 just a block north of the first church. This church was used for 20 years and later razed when the third and present church was finished.

Dubuis left Castroville in 1852 and was assigned to San Antonio and appointed vicar-general by Odin. He was consecrated the second Bishop of Texas and first Bishop of Galveston in 1862. He was a tireless worker, building churches and promoting Catholic faith throughout South Texas. He recruited many sisters and priests from Europe to serve in Texas, including the Sisters of Divine Providence from St. Jean-de-Bassel near Nancy, Alsace. He assisted them in building their first convent in Castroville, today used as a retreat center. In 1868 he assigned a Frenchman, Father Peter Richard, as pastor for St. Louis Church. Dubuis returned often to his first parish and laid the cornerstone for the third church. He was well-loved and remembered in Castroville.